The Narvik Bunkers map is about World War II defense installations in the Ofoten region that were built by the German forces to defend against a Norwegian or allied counter-attack, an attack that never came once the allied finally pulled out of Narvik by 8 June 1940. While the focus is on installations the Germans would have found useful after 8 June 1940, also swept up in the survey are a few Norwegian civilian constructions predating the war, and Norwegian military installations from the post-war years (i.e. from the Cold War). Outside the scope of this survey is the substantial number of installations related to Norwegian independence in 1905, World War I, and the Battles of Narvik of 1940 that can be found for example around Bjørnfjell.

The map is a hobby project to identify interesting places for family trips and to understand how all these installations were meant to work together. The project is ongoing and the map is incomplete: there are sites I have not visited yet (e.g., Ramnesodden, Tjeldodden, Elvegårdsmoen) or found (e.g. on Ankenesfjellet and Øyjord), and I have probably missed interesting installations near some that are on the map.

I am not trained in military history, I do not have access to information beyond what I found on the internet and in the Narvik yearbooks, and there may be glaring errors on this page. Please send me an email if you find errors (narvik.bunkers@gmail.com). More about this project here.

The German forces had two objectives in the region: maintaining access to Swedish iron ore through the port of Narvik, and providing a marine support base for the Atlantic Wall. To achieve the former goal they built the Festung Narvik, a fortification of the city that began far West of the city limits. Notable installations regarding the latter were the shipyard in Bogen and the submarine base in Skjomen.

Turns out, there are very few impressive (i.e., Regelbau) bunkers (left) around Narvik. Much of what is still around falls into the category Feldmäßiger Ausbau or not even that, i.e. it is based on stones and unarmored, thin concrete that would have provided protection from machine gun fire but not much more than that, or just patches of blasted rock that provide a foundation for artillery or buildings. Significant protection had been provided by structures built into the rock, most notably tunnels (readily explorable are big ones at Sjømannshjemmet and Emmenes, and smaller ones at Oscarsborg, Lillevika, Fagernesfjellet, Emmenesveten, Emmenes, Einebærneset and Grindjord) or group shelters (i.e. single-room bunkers, for example Oscarsborg, Furuholtet, or upper Karistranda. This was in line with the strategic descision to minimize the use of concrete as that was a scarce resource in Norway. Among the concrete-heavy structures is a pillbox bunker with decent reinforcement at Risnakken/Ankenes. 2 m thick Type B Regelbau bunkers or installations with entrance areas that resemble those are the Regelbau 634 Machine Gun Bunker and Regelbau 628 Group Bunker (shelter) in Fagernes, the tunnel bunkers south-east and south of the old NSB administrasjonsbygg, the group bunker at Emmenes/Tangodden, and a (most likely) Regelbau bunker at Storåsen that now serves as a garage in the basement of a house. It looks like all of those bunkers had received some attention after the war if only to make them suitable for use as civilian bomb shelters (the addition of doors is a common thread here) with the exception of the Regelbau 628.

A compact overview of the design style that I would call typical for the region can be seen in the Oscarsborg/Fjellheim area: embrasure, tunnel with shelter, command post, trenches, machine gun positions, group bunkers. A different style like the block-style bunker seen at Kleiva/Fjellheim is also seen in Kjelde.

Otherwise noteworthy is a communication bunker (sambandsbunker) up the hill at Fagernesfjellet that seems to have remnants of fixtures for electrical installations at the wall. There is what seems to be a Koch Bunker at Framneslia, and what may have been an ammunition storage in Mattisjorda/Håkvikdalen with several buildings in a regular pattern.

A stroll through town wouldn’t be complete without noticing the different style doors that block entrances to tunnels: besides German Panzertüren (steel doors) we find a German gas protection door and a bunch of (post-war) Bogen Verft A/S doors. The systematic behind that isn’t quite clear to me. The post-war doors can be lifted out of the hinges in case of emergency (after unlocking) while the German bunker doors cannot. Also, there are a few doors with NATO numbers that I suppose are remnants of Cold War use by the Norwegian military.

Just about every machine gun or observation point seems to be oriented toward the water: Narvik harbor or other destinations, along beaches, or across the fjord, i.e. for sea defense. Possibly the most notable exception is the defense line of machine gun positions at Tøttadalen that face East supposedly to prevent land-borne advance along the coast toward Karistranda and up the valley toward Forsnesvatnet (in addition, the positions closest to the coast also overlooked the fjord). Similarly, the two fortified machine gun positions at Oscarsborg are overlooking the approach from Fagernestoppen. There is a suspicious string of bunkers or tunnels at Herjangen that may have served to shelter troups trying to block land advance. There are small machine gun posts that were apparently intended to guard local installations, for example at Sykehusveien, off of Administrasjonsveien, at Utsikten, on Øyjord, and in Kjelde, and a few pillboxes in Narvik (since removed) that would have been good to monitor traffic within the city. Anti-aircraft artillery was presumably located at positions from Durmålshaugen to Framnes and at Toppåsen/Øyjord.

Virtually all installations that I found are close to roads or trails, either still in use or overgrown (my discovery may be biased toward those). Of the positions I found, the Pole of Inaccessibility is one of the machine gun position of the Tøttadalen defense line.

There are a couple of war-related installations in Narvik that are not of German origin. Most prominent is the LKAB Bolagstunnellen (cf. story in Fremover), which was built before the German occupation, used as a civilian bomb shelter, and only closed in 2006. Also, the tunnel behind Lasarettet was built pre-war as a civilian bomb shelter, and there was supposed to be one in Kleiva, maybe this bunker “without entrance”, not sure about that one, though. Further candidates for LKAB constructions are the shelter at Nedre lokstall, the tunnel at Villa Meyer, and possibly the foot tunnel next to Frydenlundstunnelen. The tunnel near Fjellheim stems presumably from mining operations.

Bunker trips for the whole family around Narvik

The following section lists destinations that may be of interest to a family with flashlights. All destinations are along a road, path, or trail. Just about any flashlight/cell phone light will do in the bunkers and narrow tunnels while I would recommend a good flashlight when visiting bigger tunnels with children. I think the places listed below are safe to visit (although they may be slippery and may have low ceilings) but note that I am not trained in structural safety, so venture into these unmaintained, 75-year old structures at your own risk. There were no allied attacks on Narvik after 8 June 1940, so the structures were never actually put to a test. Of the places listed below, the bunkers at Tangodden and installations at the old ferry terminal in Grindjord are reachable by stroller. 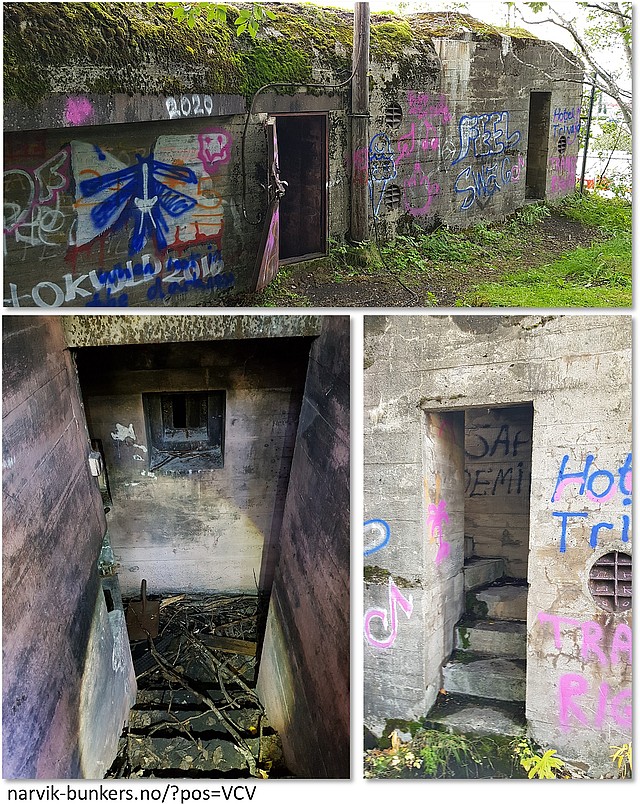 This installation had excellent control of the harbor, and taking out a bunker with 2 m thick walls would have been a challenge. The bunker is a Regelbau 634 machine gun bunker. It contains original steel and gas doors and the characteristic view port from the group room at the entrance. Also note the emergency exit shaft in the crew room. It had been retrofitted with electrical installations, including lighting in recent years that unfortunately have been vandalized already. One of the rooms is flooded (the ventilation room). The front door is a post-war addition. There’s quite a steep drop so the roof is not a safe place to climb around. The most spectacular aspect for children may well be the narrow staircase up to the observation point.

There are a number of narrow tunnels in the region, some with multiple exits, and some with a room (presumably a shelter) along the way. They resemble each other stylistically but it is quite fun to find them. They may be passages or access ways to an embrasure. They are generally quite low, maybe 1.7 m in height and appear to be largely in their original state. 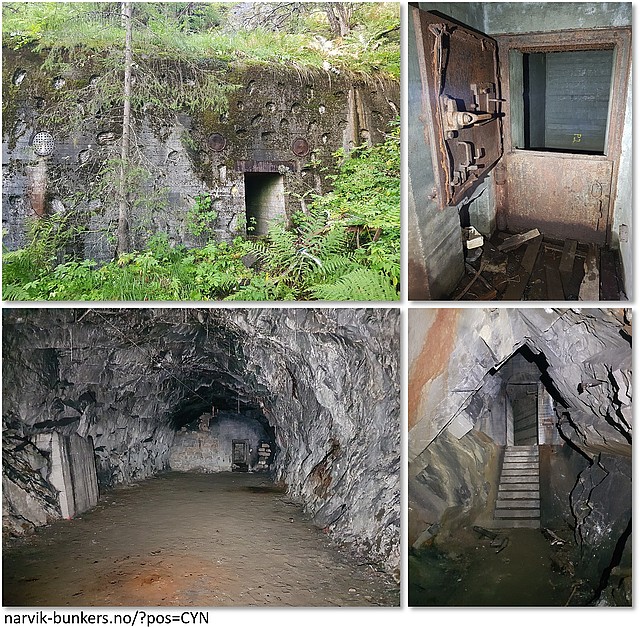 The “back entrance” has a well-developed path leading up to it but is walled shut. There is a small lookout at the end of a trench overseeing this path. To get to the main entrance follow one of the trails or the trench up the hill. The narrow bunker entrance is boasting 2 m thick walls. The design of the entrance area follows Regelbau standard with a view port from the crew room followed by a heavy steel door (Panzertür). Need to climb/step through the upper section of the steel door. The corridor from the entrance ends in a staircase that leads down into a wide, open tunnel. Some interior walls, the doors, damaged furniture, and sanitary installations are presumably post-war modifications to turn this bunker into a civilian bomb shelter. Surveying marks can be seen along the floor. The bunker is dry apart from possibly a puddle at the steel door entrance, but the air may be very humid. 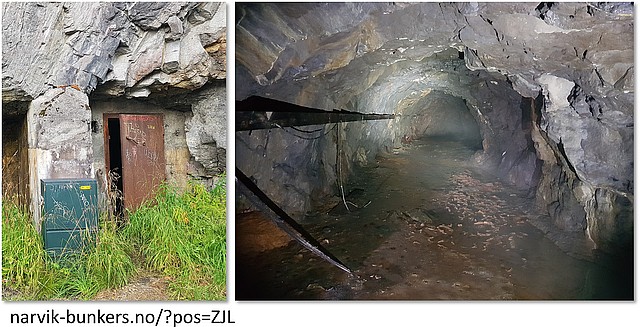 The loop tunnel has two exits presumably for safety reasons. The tunnel floor is usually wet (slightly muddy, nothing serious).

Author: Chris Petrich, License: CC BY 4.0, more on the About page.